Stripes in the forest by Aleesah Darlison and Shane McGrath

We will hide from their eyes, their dogs, their fire sticks.

For always, we will be. Stripes in the forest. Stealth in the shadows. 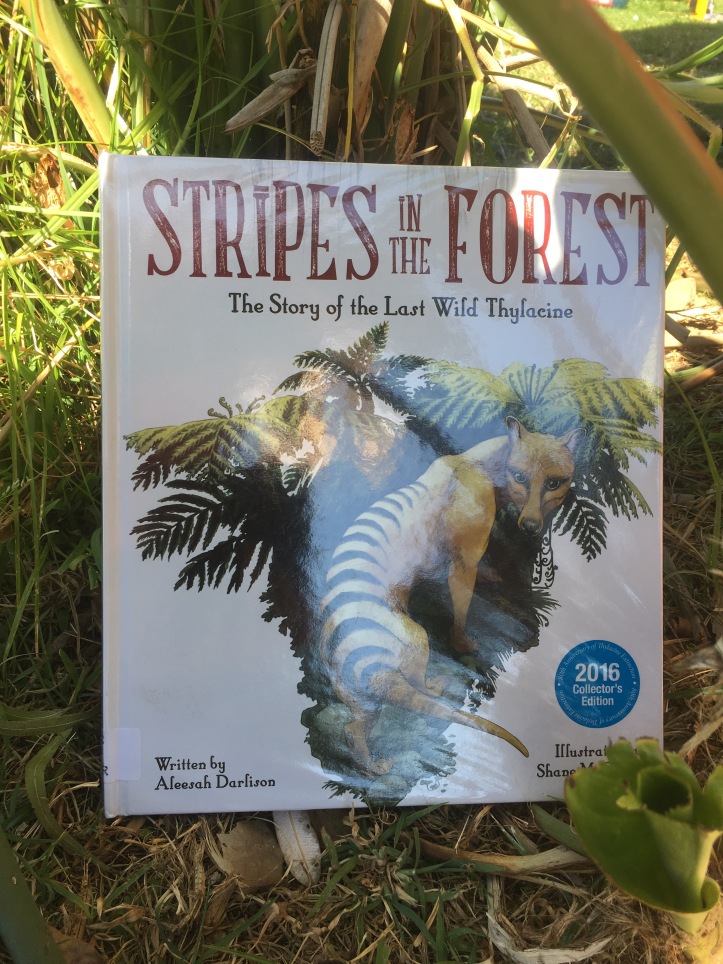 Aleesah Darlison has created a story which captures the sprit of the last wild Thylacine, hunted down by man. Stripes in the forest is not so much a story of hope but one of warning. As I read this book to my children and some classes there was a sadness that overcame us all and many questions – why did they hunt them? What did they do wrong? Are they still alive? What can we do now?

The Thylacine was an amazing creature that once inhabited mainland Australia but was slowly hunted out due to farmers killing them to protect their flocks and hunters killing them for sport. The last known Thylacine died in captivity in 1936 but since there rumours have abounded as to whether or not some have still survived.

Shane McGrath’s illustrations give more depth to the story adding the darkness of the rainforests, the hiding places the Thylacine seemed out when it was hunted and the fear it felt when it lost it’s family. The Thylacine is drawn in great detail, giving the reader a true understanding of how it looked and moved.

Stripes in the forest will need some extra discussion after it has been read as it is quite dark; Guns are fired and animals are killed – a very sad reality which still happens today.

But despite it darkness it brings across a very important message – we need to look after the animals on this earth. We need to support those who work in animal conservation so that no more animals become extinct. We need to learn from our past mistakes to make sure this does not happen again.

The facts at the end of this story are a great way to inspire further research into the Thylacine and perhaps some groups who still believe it may be running around somewhere in Tasmania!

So how can we link this to Sustainability?

This site uses Akismet to reduce spam. Learn how your comment data is processed.